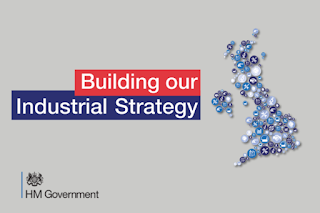 In "Harnessing the Potential of the UK's Home Grown Inventors" - The Government's Proposed Industrial Strategy 24 Jan 2017 Inventors Club, I mentioned the government's commitment to:


"....... seek to harness the potential of the UK’s home-grown inventors and stimulate user led innovation by launching a challenge prize programme. This prize, which will be piloted through the NESTA Challenge Prize Centre, will help inform our support to the ‘everyday entrepreneurs’ operating in companies and at home – such as through supporting enabling environments, incubators and maker spaces."

To my great joy and surprise, the  government has already started to implement its commitment by advertising for new IP policy advisors for the North and Midlands (see Implementing the Industrial Strategy: IPO seeks new Business Support Policy Adviser 25 Jan 2017 IP North West) and by collaborating with Nesta to "pilot an ‘inventor’ prize that will inspire and harness the potential of the UK’s home-grown inventors and stimulate user-led innovation" (see Announcing the Inventor Prize 24 Jan 2017).

I was even more delighted by the compliment that Nesta paid to two Yorkshire inventors in that announcement:


"But we are also looking for everyday inventors that see a problem in their daily lives and have an idea for a way of solving it in a way that improves people’s lives. This is a search for a modern day Percy Shaw - a Yorkshireman who repaired roads in the 1930s and whose light bulb moment was the invention of the ‘cat’s eye’ that helps prevent car accidents at night. Or more recently Emily Cummins, who at 19 years old invented an award-winning solar evaporation refrigerator."

Yorkshire may trail London, South East England, the South West, East of England, West Midlands, North West and Scotland in the number of patent applications but there is no denying the quality of inventions that emanate from this county.

I will do everything I can to support this initiative. One of the ways in which I can do that is through the Inventors Club, Through that website I shall try to offer a wide range of services. I can help with advice on intellectual property ("IP") and, in particular, with patents (see also my Patents FAQ and IP Glossary). To help inventors, entrepreneurs, their investors and professional advisors throughout the North West and the rest of the country I have expanded and improved my IP service (see Immediate IP First Aid Nationwide 25 Jan 2017.

If you have a new product and are wondering how best to protect it, if you are thinking of launching a new business and are thinking of registering a trade mark, if you have received a solicitor's letter accusing you of infringing someone's copyright, design, patent or trade mark, if you think someone is infringing one of your IP rights or you have any legal question relating to branding, design, technology or creative works, call me on 020 7404 5252 or send me a message through my contact form.


"It is not every office that has a 3D printer chugging away in reception" I thought to myself as I passed through the entrance of the 3M Buckley Innovation Centre in Huddersfield. I was there at the opening in 2012 (see Launch of Huddersfield University's 3M Buckley Innovation Centre 27 Sept 2012). Despite my offer "to help on behalf of my network of patent and trade mark attorneys, solicitors, product design consultants, angels, financial institutions and other contacts with talks, clinics and any other way I can" they had not been in touch with them nor they with me.

The reason I came back was a Rise & Design networking meeting arranged by Design Network North at the Centre between 08:30 and 12:00 on Friday, 20 Jan 2016. The theme of the meeting was "The Power of Collaboration". The event consisted of presentations by:

There were short pitches by various members of the audience and a quick news update by Terry McStea, network manager of Design Network North.

Pete Culmer had already described his collaboration with Richard Hall on his LinkedIn page:


"Richard and his team at Pd-m were commissioned to work with our Surgical Technologies research group on the commercialization of a medical device here are the University of Leeds.

We needed Pd-m’s expertise in converting a research-level concept into an innovative, realisable and manufacturable product which we could present to commercial partners for a license deal.

The project required Richard and his team to work closely with a multidisciplinary team including academic researchers at the university, surgeons at Leeds Teaching Hospitals and commercial partners.

Pd-m were instrumental in helping to deliver a robust prototype for evaluation in a product live trial at the project’s culmination, ensuring that it was a success.

In summary, Richard and his team are a professional innovation consultancy and I can highly recommend them."

Amanda Scacchetti spoke about developing a market for her company's reconditioned pushchairs which she described as tantamount to a start-up.  She spoke about the coordination of technical and marketing staff within the business, the market research that was undertaken, the financial planning and the not-inconsiderable risks that were taken in the early days. She mentioned the emotional attachment that families develop for their children's pushchairs and how some actually conducted farewell rituals as though they were seeing off a member of the family.  She reported that the scheme has been a success and has actually boosted sales of new accessories.

The last presentation was on the development of a cap for cooling the scalp of patients undergoing chemotherapy by academics of the University of Huddersfield for Paxman Coolers Ltd. The purpose of the cap is to protect hair follicles from chemotherapy drugs by cooling the scalp to a temperature that impedes blood flows. The device is in use in hospitals around the world and patients wearing the cap report relatively little hair loss. Apparently it took several iterations with different tools and materials to perfect the product and several samples of the device were demonstrated to us.  Patrick Burke proudly told us that his company had two UK and two "world patents" for the cap.  Had there been time for questions I would have asked him about Paxman's IP strategy, in particular, the countries in which patents were sought, whether any of the applications had been granted and how they would fund the defence of a revocation claim or an infringement action given the cost of IP litigation in this and other common law jurisdictions. Sadly, there was no time and they left the meeting before I could make my way over to them.

There was, however, time for me to greet Richard Hall whom I have known for many years and with whom I have collaborated occasionally.  It was good to renew my acquaintance with Ian Rowland of Grant Thornton and to meet his colleague, Emily. I also renewed acquaintances with Adrian Sewell who has started to practise as Tandem Patents just outside Keighley and introduced myself to Phil Stephenson of Bailey Walsh. Other folk I met after the talks included Robin Tones of RTC, Gill Watson of Kirklees Council and Leeds LEP, Jason Roebuck of Fizical Design and Tim Stern of AME.

Both the 3M Buckley Innovation Centre and Design Networth North announced some interesting networking meetings which I shall tru to attend in future.
Posted by Jane Lambert at 09:39

Who owns Goodwill generated by an Employee or Partner?

Jay Bhayani is a well-known employment lawyer in Sheffield. When the Doncaster law firm Taylor Bracewell LLP wanted to set up an employment law department with an office in Sheffield they turned to Ms Bhayani to set one up. They agreed to make her a salaried partner and to practise from Sheffield in the name or style of "Bhayani Bracewell."

Ms Bhayani worked for the firm from 2011 until 2014 but then fell out with them. For a little while after she had left the firm they continued to practise from Sheffield in the Bhayani Bracewell name.  She sued them for passing off alleging that their continued use of the Bhayani Bracewell business name and certain other acts might lead people to believe that she was still working there. Taylor Bracewell replied that any goodwill that accrued to the Bhayani Bracewell name belonged to them and not to her.  They applied for judgment on the ground without a trial on the ground that Ms Bhayani had no real prospect of succeeding in her claim and there was no other compelling reason why the case should go to trial.

Judge Hacon decided the point in favour of Taylor Bracewell.  After reviewing the case law he concluded that "in the general run, goodwill generated by the acts of an employee will be vested in the employer" and, similarly, "where an individual works in a partnership the goodwill generated by his acts will in the normal course vest in the partnership." However, he acknowledged that there were exceptions and considered what they might be and how they might arise. He concluded that an employee or partner acquires goodwill only in respect of activities outside the scope of the employer's or the partnership business. Applying that rule to the facts of the case before him. His Honour could find no reason why the general rules should not apply,

There were other issues in this case. The judge reviewed the principles by which the court can decide a case without a trial, the difference between reputation and goodwill for the purpose of an action for passing off and whether there was any scope for arguing that Taylor Bracewell's registration of the Bhayani Bracewell trade mark should be revoked on the ground that it was likely to mislead the public. Should anyone wish to consult me on any of those points, call me on 01484 599099 during office hours or send me a message through my contact form.
Posted by Jane Lambert at 14:39